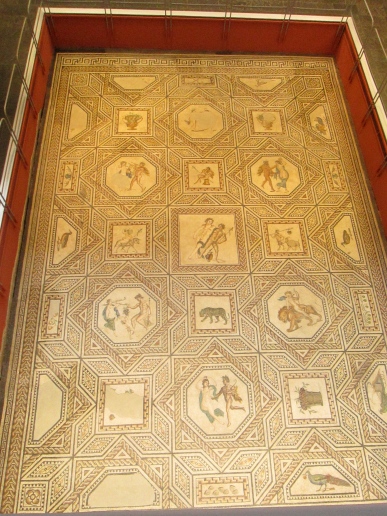 Millions of tiny fragments of glass, stone, and ceramic comprise the incredibly intricate and colorful mosaic known as the ‘Dionysus Mosaic.’  The mosaic was once part of a villa on the site of the now Romano-Germanic Museum in Cologne, Germany.  Most sources say that it was created around 220 or 230 A.D.  The mosaic is a major attraction to the museum, and I must say that I can see why.  There are a number of figures, animals, and designs to investigate.  This lovely mosaic is so well-known in this area that when President Clinton visited Germany during his presidency, his hosts had a dinner party on it.  Stew on that, conservators. 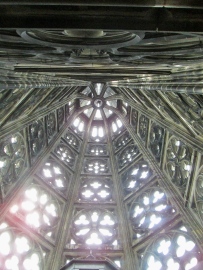 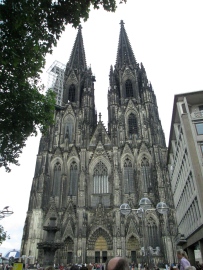 The city of Cologne, Germany has a long and interesting history.  When I visited the city, everywhere I looked there was some reminder of ancient and Medieval cultures.  Much of Cologne was destroyed during WWII, but an impressive amount remains.  And, nothing is quite so impressive in Cologne as the Kolner Dom/Cathedral.  Beyond being an excellent example of Gothic architecture, as well as an UNESCO World Heritage Site, it is a beautiful building.  Construction began in 1248 to house the reliquary of the Three Kings (a giant golden box supposedly containing the bones of the Biblical Magi) but the cathedral remained incomplete until the 19th century.  Consequently, the Dom has a multilayered history from the ground-up.  The interior of the Dom is everything you could possibly want from a cathedral: beautiful stained glass windows, mosaics, murals, ornate altars, etc.  After exploring every inch of the nave, you can actually hike up one of the towers and lookout on the city (I can’t imagine doing that climb more than once).

Around and underneath the Dom are Roman ruins of various sizes, from a random wall or arch to larger architectural remains.  Just meander over to the parking garage near the Dom and you’ll find a lovely bit of Roman ruins.  Within the Cathedral Treasury, which houses an amazing assortment of ecclesiastical robes and jewels, you can also view the grave goods of two Frankish burials of a woman and a boy.  Ah, a structure to fulfill every need of a history/archaeology nerd.

Ten years ago I participated in the Athienou Archaeological Project in Cyprus as my introduction to archaeological fieldwork, particularly excavation.  Part of the field school was traveling throughout Cyprus to gain a better understanding of the prehistory and history of the island.  On one of the field visits, we explored Paphos, a UNESCO World Heritage Centre.  Kato Pafos, or Paphos, is a beautiful archaeological park that includes beautiful mosaic floors from four different Roman villas.    There are a number of monuments in the archaeological park (a whole other blog post to be), such as a huge necropolis.  But back to the mosaics.  The mosaics are the following: The House of Dionysus, Theseus, Aion, Orpheus, and Four Seasons.  They date between the second century AD and fourth century AD.

The necropolis at Kato Paphos is a fantastic combination of completely creepy tombs and unique history.  The use of the tombs has varied, from a necropolis to a home for squatters.  The Tomb of the Kings (Tafoi ton Vasileon)—named for it’s impressive structure although there isn’t any evidence of a king being buried there—was built during the Hellenistic period, sometime during the 3rd century BC.  It was used as a burial area through the Roman era until the Medieval period, when the necropolis was used as a quarry and home for squatters.  All that is left are the niches and rooms for human remains.

If you need the entire history of the Roman Empire reduced into a nutshell, with fantastic maps and photographs of archaeological ruins and busts, then this is the book for you!  The history of Roman civilization is a huge topic to tackle, especially in the span of a semester.  As a Classics minor, I had a difficult time remembering the major dates, people, and places figuring from 800 BC to 540 AD, from the origins in Rome, to fall of the Western Empire.  The Atlas provides a visual depiction of the rise and fall of Rome.  I personally like being able to see a broad depiction in order to better understand the major themes of a civilization.  Scarre provides detailed maps of important places of expansion, as well as information on trade, literacy, and cultural life in different periods.  The timelines are excellent; the timeline is broken down into The Roman State, Building and Construction, Literature and Philosophy, and Asia, Africa, and the Mediterranean.  This book, however, cannot stand alone since it is a broad overview.  It is a great companion to classical texts and textbooks on the Roman Empire.  It is also perfect for a quick overview before an exam.  For those simply interested the rise and fall of Rome, the Atlas provides a great overview with fantastic images.

I had the opportunity to explore the extensive Roman ruins of Salamis, which is considered one of the best archaeological sites on Cyprus, while traveling around North of the UN Buffer Zone. While wandering around the ruins, it is easy to imagine the bustling city it once was. Salamis became the ancient capital of Cyprus as far back as 11 BC by the Greeks and was subsequently occupied by a number of civilizations (i.e. Egyptians to Romans). Roman emperors Trajan and Hadrian commissioned some of the buildings; construction was conducted primarily after an earthquake in 76 AD. There are Romans baths, mosaics, an amphitheater etc. The city was destroyed by an invasion around 674 AD, forcing the occupants to the area around Famagusta/the southern half of Cyprus.

The site was looted constantly until 1952, when excavations by the Department of Antiquities began. Excavations were halted in the summer of 1974, when Turkish forces invaded Cyprus and subsequently occupied the area. Government officials of the Republic of Cyprus have long been concerned about the treatment of this archaeological site, since it is located in the Turkish Republic of Cyprus. Hopefully, UNESCO can declare Salamis a World Heritage Site someday. Archaeological sites tend not to fare well when it comes to war and politics.