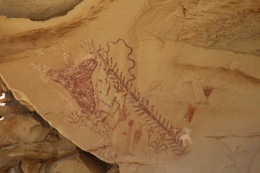 “Halfway down the canyon toward the south, there is a very high cliff on which we saw crudely painted three shields or chimales and the blade of a lance.  Farther down on the north side we saw another painting which crudely represented two men fighting.  For this reason we called this valley Cañon Pintado,” wrote Fray Escalante on September 9, 1776.  I read these words on an interpretive sign while walking a dusty trail to view some of these painted images.  It’s thought that Father Dominguez and Father Escalante observed a variety of Native American pecked and painted rock art in this canyon as they traveled through the Douglas Creek Valley.  This area is now a popular recreation site, where you can explore prehistoric and historic pictographs and petroglyphs.

This 16,000 acre area is listed as a National Historic District on the National Register of Historic Places as an important historic property in understanding our nation’s past.  The rock art panels represent several time periods and cultures.  There are panels that were created by the Fremont, dating between 800 to 1150 AD; these images include animals, anthropomorphic figures, and geometric symbols.  The Ute created images like bear paws, horses, and hunting scenes between 1200-1881 AD.  Historic rock art includes ranching symbols, buxom ladies, and horses.  As always, when visiting archaeological sites, keep in mind that these places are incredibly fragile and need to be visited with respect. 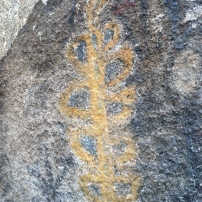 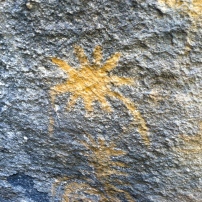 These beautiful pictographs were created by the Monachee (Western Mono) people, particularly by the Potwisha tribe, who inhabited what is now the Potwisha campground Sequoia National Park, California.  The rock art was outlined with chalk back in the 1970s, which was a common practice when recording rock art elements.

*Please note: rock art is incredibly fragile.  Do not touch rock art, spray-paint it, or vandalize it in any way.  Not only is it ethically wrong, it is illegal. 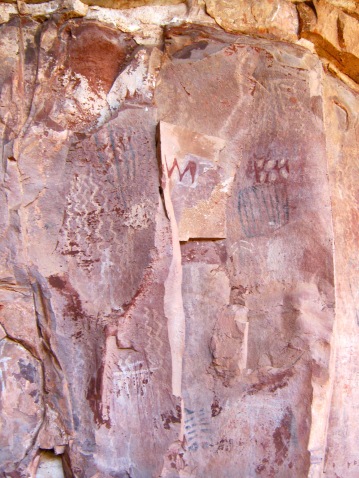 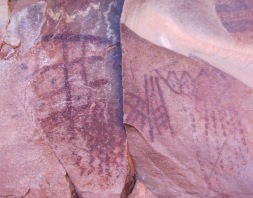 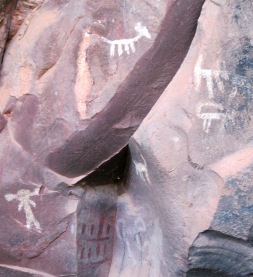 *As ever, be respectful when visiting these fragile archaeological sites.  Never touch rock art, as that can destroy the images.  Be careful not to disturb the architecture and remember it is illegal to take artifacts. 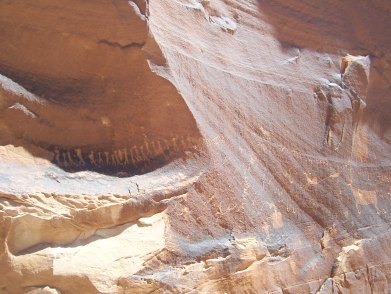 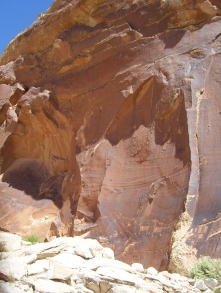 The archaeology of Comb Ridge, a vast swath of land in Utah (it is currently part of Bears Ears National Monument), is absolutely amazing, with hundreds of rock art panels, dispersed habitation sites, granaries, and so on.  However, hiking Comb Ridge in June is a terrible idea and a bunch of friends and I decided to venture out regardless.  It was boiling hot, exposed, sandy–ugh.  At least there’s rock art.  A ridiculous amount of rock art.  Viewing the Procession Panel definitely made up for any discomfort!  It is thought that the 179 petroglyph figures may depict some kind of ceremonial gathering or migration story.  But, as with most rock art, the interpretation is a bit up in the air.  I had some trouble finding information about this specific panel; one website notes that it may date to the Late Basket Maker period (ca 450-750 AD), but it doesn’t provide any evidence to support that particular date.

*Please note: rock art is incredibly fragile.  Do not touch rock art, spray-paint it, or vandalize it in any way.  Not only is it ethically wrong, it is illegal (see blog post on ARPA). 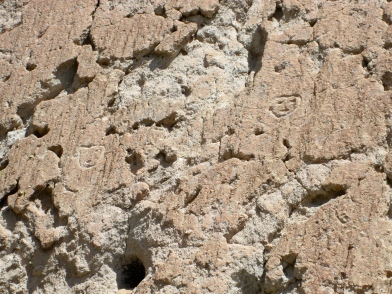 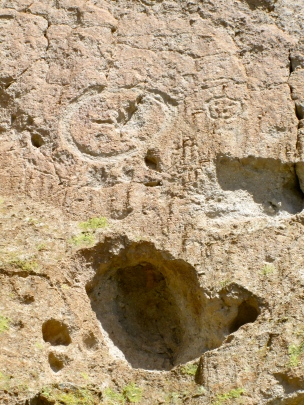 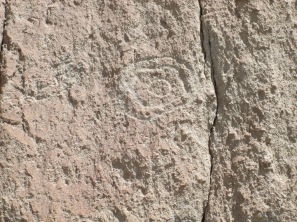 Between 1150 and 1550 CE, the Ancestral Pueblo people carved out homes from the volcanic tuff in the area that is now Bandelier National Monument. One of my favorite sites at Bandelier is Long House, a large complex of multi-storied dwellings built against a cliff face with hundreds of small rooms carved into the rock. I love the petroglyphs throughout the complex. You can see the holes for the roof beams, indicating the location of second and third floors. It is amazing to be able to see where people would have stood on top of their roof to make the designs.  Please note, it is incredibly important to never climb on the walls of any site and to never touch the rock art images; it is both unethical and illegal to damage archaeological sites. 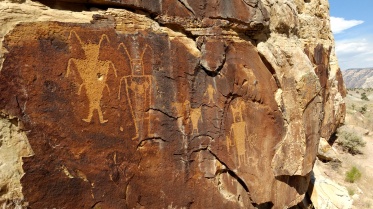 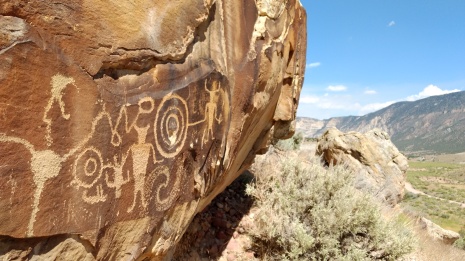 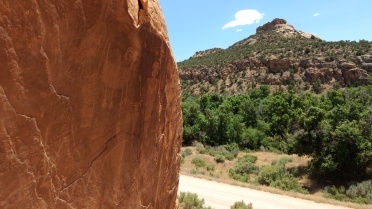 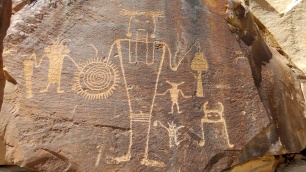 Don’t let the word ‘Dinosaur’ fool you; at Dinosaur National Monument, there are hundreds of prehistoric rock art images that were created by the Fremont people. When I recently visited the Monument, I was absolutely amazed at how many different panels exist. There are pictographs (painted) and petroglyphs (chipped or carved) represented, although petroglyphs are the dominant form. The rock art images are in the ‘Classic Vernal Style,’ which includes human and animal-like figures. Many of the figures have a distinct trapezoidal shape and wear what looks like different types of jewelry and headdresses. For more information on the rock art and culture of the Fremont, see by blog post on this topic or visit the Dinosaur National Monument website. I highly recommend making the trip to this park for the rock art alone!  Please note, it is both unethical and illegal to touch or vandalize rock art. 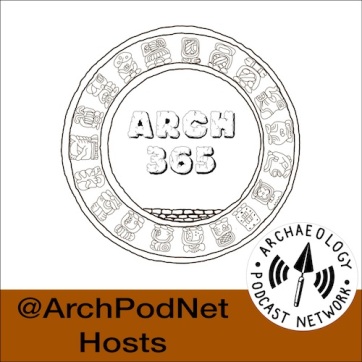 My ARCH365 episode on the Fremont people and culture.  All episodes of the ARCH365 Podcast are available on the Archaeology Podcast Network website!

Some of the most spectacular rock art of the Great Basin and western Colorado Plateau was created by the Fremont prehistoric people, but who were the Fremont?

Script from my ARCH365 Episode (click here to listen)

Some of the most spectacular rock art of the Great Basin and western Colorado Plateau was created by the Fremont, but who were the Fremont?

There are so many fascinating prehistoric peoples that made the Great Basin and American Southwest their home. The Ancestral Puebloans of Mesa Verde and Chaco Canyon, the Hohokam irrigation canals and ballcourts of southern Arizona, the gorgeous pottery designs of the Mimbres of New Mexico, and so on, are some of the more well-known prehistoric cultures. Outside of archaeology, one of the lesser recognized, but incredibly unique, prehistoric peoples of the Great Basin and Southwest are the Fremont.

The name for this culture comes from the Fremont River in Utah, where the Navajo and Ute Native American tribes discovered the first Fremont sites. The Fremont lived in the sagebrush and pinon high desert region of the Great Basin and western Colorado Plateau, so areas of Utah, Nevada, and Colorado. They occupied this region from 600 to 1400 AD. It is more difficult to trace the Fremont on the landscape as a distinct culture after 1200 AD. Their lifestyle may have changed after long periods of drought and competition for resources with their neighbors. The Fremont were roughly adjacent to and roughly were contemporaneous with the more famous Ancestral Puebloans, who constructed pueblos and cliff dwellings throughout the southwest.

Well, the very fact that they aren’t easy to classify makes them interesting. This was a diverse culture, differing widely across the landscape. While some Fremont people were building above ground structures, others were constructing subsurface pithouses; some lived in large groups, while others lived in smaller bands—all contemporaneously. Consequently, archaeologists have struggled to define the Fremont as a distinct culture as an entire group since there are so many exceptions. They were not a cohesive group, demonstrating their flexibility to adapt and change.

They were primarily hunter-gatherers, supplementing their diet with farming. Pithouse villages with 10 to 100 houses, dotted the landscape, although it’s unlikely that they were all inhabited at the same time. These small villages tended to be located near streams, where fields could be easily irrigated. Granaries, small structures that stored food, were built into hard to reach places for the lean times. The Fremont built communal structures, essentially an oversized pit house that could accommodate more than just a family; they would also build large structures at the center of their village. Artifacts like turquoise beads and other exotic materials have been found in these structures, suggesting that some kind of ceremonial activities took place.

The Fremont made all kinds of fascinating artifacts and artwork, including clay figurines. They are fragile pieces of art since most were made of unfired clay and are typically not larger than the palm of your hand. These figurines typically have a trapezoidal shape and sometimes have arms, hands, legs, male, female and androgynous forms, hair-dresses, tattoos, jewelry, and so on. In some areas of the southwest, they would have been used for ceremonies, while in others they may have been toys for children.

They also had a unique rock art style that is truly stunning. The rock art includes pecked and painted images of rhomboid to trapezoidal – shaped bodies with broad shoulders, wearing elaborate necklaces, earrings, and headdresses. There are typically zoomorphs, animals, on the panels, such as deer or elk. Figures tend to be located on south or west facing sandstone walls, possibly associated with water or canyon confluences.

The primary way to see Fremont archaeology is through rock art. Dinosaur National Monument has some of the most spectacular Fremont rock art in the west. Just remember that you can’t touch the rock art or remove any artifacts from sites located nearby. That’s unethical and illegal.