I made a quick kid friendly video for all of those caregivers out there, filling in the role as teachers during this crazy time.  It’s the ‘ABCs’ of archaeology, with terms, bouncy music, and moving images.  Some of the terms I chose are ridiculous, but you’d be surprised how hard it is to find an archaeological term for ‘Q’!  Click on the link below, which will take you to YouTube. 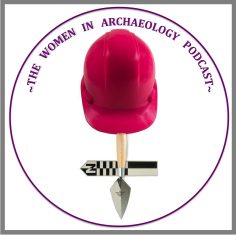 Chelsea Blackmore joins us to discuss her work on identity, oppression, queer archaeology and outreach.  Dr. Blackmore is a professor at UC Santa Cruz whose primary work has focused on the construction of social difference in Mesoamerica, particularly among the Maya.  Some of her more recent work has included analysis of a Spanish Mission site in California and pirate archaeology.  We discuss how her interests developed, the need for better representation in archaeology, and the new Queer Archaeology Blog.

Find Chelsea and the Queer Archaeology team on:

Historians can trace the living-history movement as far back as 1881 to the European open-air museums and farms. Trying to highlight the past in the United States can be seen after the Civil War (Anderson 1982). This effort was rooted in the need to preserve what civic leaders and middle-class professionals considered to be traditional American beliefs and cultural values, especially with the influx of European immigrants.  Those within groups like Sons of the American Revolution tried to find ways to best display examples of their ancestral and national values.  Hoping to create a sort of shrine to the past, these places (mostly historic houses and landmarks) made history a place to visit.   A few traditional historic houses and farms later evolved into living history museums, but for many years these sites espoused and aimed to glorify the cultural values of the Founding Fathers through costumed interpreters and activities.

The most influential living history museum is Colonial Williamsburg.  In 1926, John D. Rockefeller was convinced to fund a project that would restore the entire Williamsburg community to the time of the American Revolution, since it was considered the birthplace of American liberty (Leon and Piatt:66).  Once completed, Colonial Williamsburg gained a reputation for authenticity, with restored houses and recreated activities. As early as the 1930s, costumed interpreters guided visitors throughout the museum.  Everything was neat and orderly (i.e. no representation of slavery or other grittier aspects of history), representing a bygone time lost to the urban post-industrial world.  Spurred by the national fervor created by Williamsburg, many more outdoor living history museums were created during the 1950s.  Again, a nostalgic era was portrayed with costumed hosts and craftspeople demonstrating life as it supposedly once was.

A more realistic interpretation of the past was born out of the cultural uproar of the 1960s and 1970s that spurred the deconstruction of outdated historical theory and the rise of ‘new social history.’  Long neglected subjects would become the new focus of this theoretical revolution: women, African Americans, working classes and confining political and cultural strictures.   The past was being explored in a variety of novel methods, from experimental archaeology to revolutionizing how the past would be presented.

Emphasis on the elite figures of the past (i.e. Founding Fathers) shifted to the common and ordinary.  As for living history museums, interpretive presentation shifted from simple craft demonstration to the social, economic, religious and political standing of various figures within the community.  The concept of first and third person interpretation was taken to a higher level: many living history sites strived to move from simply having guides give a passive interpretation of history to a more authentic experience by having history literally come alive.  There is still the trend at many historic houses and museums to keep an idyllic and comfortable sense of history, forgetting that the past had weeds and filth littering the roads, and that the people themselves carried a fine layer of dirt.  Interpretative programs continue to evolve and positive change has been seen at museums like Colonial Williamsburg by bringing the more uncomfortable aspects of history to life.

[Keep an eye out for Part 3: Criticism of Living History]

Rosenzweig, Roy and David Thelen. The Presence of the Past: Popular Uses of History in American Life. New York: Columbia University Press, 1998.

I drew this back when I was in graduate school for the Anthropology Lab to keep our spirits up ;P

I think we did a great job going into the pros and cons of potentially going back to school.  Give it a listen!

Episode Summary: Today the panel discusses getting back into the grove of grad-school, especially after taking a break. They discuss reasons to delay going into grad-school, how to pay for it when you do go back, how to survive school/life balance, and what to do with your degree once you get out.