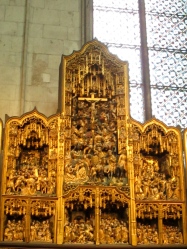 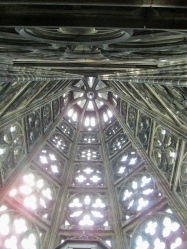 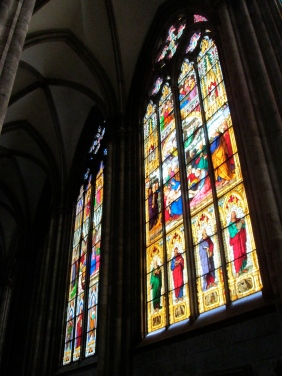 The city of Cologne, Germany has a long and interesting history.  When I visited the city, everywhere I looked there was some reminder of ancient and Medieval cultures.  Much of Cologne was destroyed during WWII, but an impressive amount remains.  And, nothing is quite so impressive in Cologne as the Kolner Dom/Cathedral.  Beyond being an excellent example of Gothic architecture, as well as an UNESCO World Heritage Site, it is a beautiful building.  Construction began in 1248 to house the reliquary of the Three Kings (a giant golden box supposedly containing the bones of the Biblical Magi) but the cathedral remained incomplete until the 19th century.  Consequently, the Dom has a multilayered history from the ground-up.  The interior of the Dom is everything you could possibly want from a cathedral: beautiful stained glass windows, mosaics, murals, ornate altars, etc.  After exploring every inch of the nave, you can actually hike up one of the towers and lookout on the city (I can’t imagine doing that climb more than once).

Around and underneath the Dom are Roman ruins of various sizes, from a random wall or arch to larger architectural remains.  Just meander over to the parking garage near the Dom and you’ll find a lovely bit of Roman ruins.  Within the Cathedral Treasury, which houses an amazing assortment of ecclesiastical robes and jewels, you can also view the grave goods of two Frankish burials of a woman and a boy.  Ah, a structure to fulfill every need of a history/archaeology nerd. 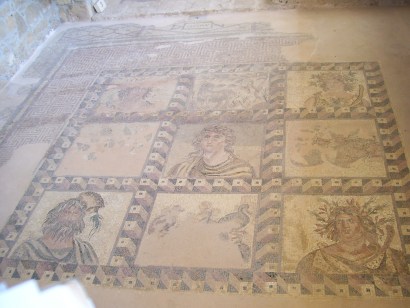 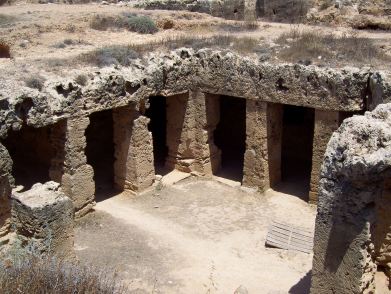 Ten years ago I participated in the Athienou Archaeological Project in Cyprus as my introduction to archaeological fieldwork, particularly excavation.  Part of the field school was traveling throughout Cyprus to gain a better understanding of the prehistory and history of the island.  On one of the field visits, we explored Paphos, a UNESCO World Heritage Centre.  Kato Pafos, or Paphos, is a beautiful archaeological park that includes beautiful mosaic floors from four different Roman villas.    There are a number of monuments in the archaeological park (a whole other blog post to be), such as a huge necropolis.  But back to the mosaics.  The mosaics are the following: The House of Dionysus, Theseus, Aion, Orpheus, and Four Seasons.  They date between the second century AD and fourth century AD.

The necropolis at Kato Paphos is a fantastic combination of completely creepy tombs and unique history.  The use of the tombs has varied, from a necropolis to a home for squatters.  The Tomb of the Kings (Tafoi ton Vasileon)—named for it’s impressive structure although there isn’t any evidence of a king being buried there—was built during the Hellenistic period, sometime during the 3rd century BC.  It was used as a burial area through the Roman era until the Medieval period, when the necropolis was used as a quarry and home for squatters.  All that is left are the niches and rooms for human remains.

Click Here to listen to the episode on the Archaeology Podcast Network! You can also download the episode from iTunes!

On this episode of the Women in Archaeology Podcast we discuss the US’s decision to leave UNESCO. We cover what this means for archaeology in the US and abroad, why the US made this decision, and potential political ramifications.

Check out the Women in Archaeology Podcast website: https://womeninarchaeology.wordpress.com/

I love being part of the Women in Archaeology Podcast!  Episode summary: Today the panel discusses the Hague’s decision to try the destruction of Cultural Sites a War Crime. What is the benefit to this? What does this mean for the future of protecting sensitive cultural sites? And how can we prevent the destruction in the first place?